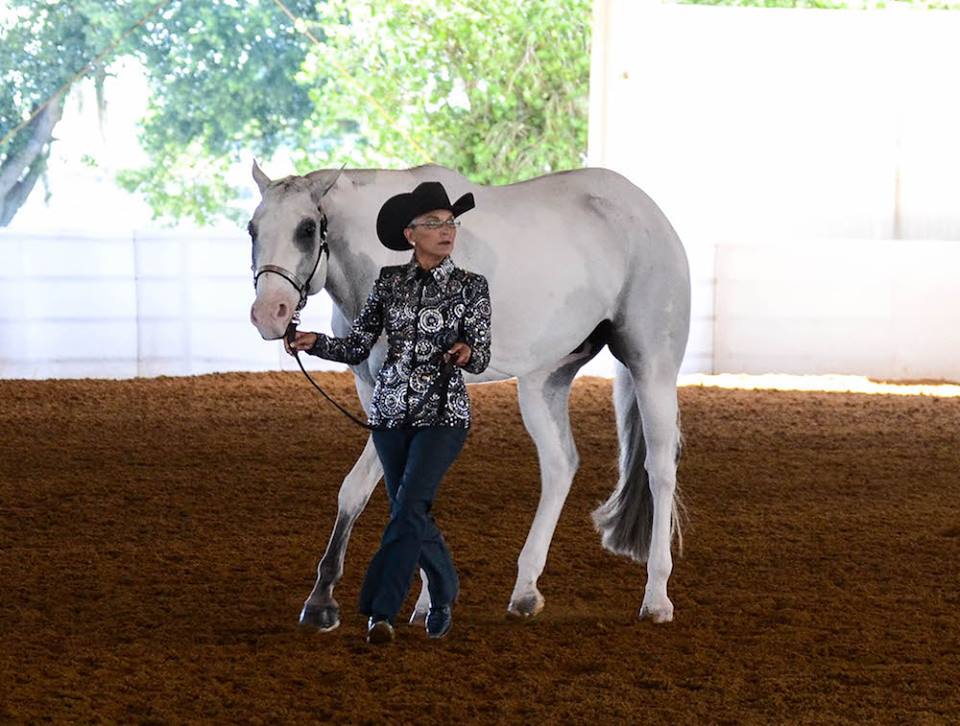 By LIZ CRUMBLY
Editor
Abbey Turner, of Traveler’s Rest, S.C., has decided to make this a period of her life the one where she pursues her horse showing goals to the fullest  – in fact this has been Abbey Turner’s go-for-it year.
She didn’t get to do it as a child or as an amateur in her 20s and 30s, but now that she’s in what the Pinto Horse Association classifies as the senior age bracket – 44 to 54 – she’s showing the way she’s always wanted to, and her hard work is paying off.

She brought home five world championships, two reserves and multiple top five and top 10 placings from this year’s Pinto World Championship Show, which she attended with her trainer, Blake Carney, of Rome, Ga. The two were in Tulsa, Okla., for the duration of the 17-day event.
At this year’s World show, the pair participated in English trail, equitation, Western Riding and English and Western discipline rail.
“I literally showed the very first day of the show and the last day of the show,” Turner said.
Her tireless efforts paid off in a big way – when the points were tallied, Turner was the recipient of the Senior Amateur high point award.

A big part of the equation was her equine partner, “HR Zip Me,” affectionately known as “Speck,” or “Noo-Noo,” short for “The Noodlemeister.”
“We call him lots of things,” Turner explained. “He’s got 10 barn names.”
The 16.2-hand gelding came to Turner just over four years ago after having earned multiple APHA world championships in Western riding in his two and three-year-old show seasons. Despite his early show ring success, it’s taken some adjustments for Turner and Speck to become the team they are now. The gelding was known for being supremely talented but a tad finicky under saddle even before she bought him.
“He had sort of a reputation for being a little diva-esque,” Turner said.
Turner, who is a below-the-knee amputee on her right side, said she also had to learn to navigate atop a new horse. For the first year she owned Speck, she didn’t perform lead changes on him because of the concern that her prosthesis might bump him unexpectedly.
Fortunately, the duo meshed quickly, and lead changes became a part of their routine.
“Within a year, everything that could have been a problem was worked out,” Turner said. “The leg only comes into play every once in a while now.”
When she’s not riding, Turner heads The Turner Team, a real estate team serving the Greenville, S.C. area. She said she has one more major show goal for this year. She wants to end the year in the No. 1 slot of the APHA Amateur Top 20 list. She’s made the list close to 10 times with five different horses, but the top spot has eluded her so far. (Her horse actually has already experienced the honor. Speck, she pointed out, made it to No. 1 with his previous owner in the 14 to 18 division.)

There’s an APHA show on Dec. 31, so competitors won’t know who came out on top until the first days of next year.
“Truthfully, the stars have just never aligned for me before,” Turner said. “I’m as close now as I’ve ever been.”