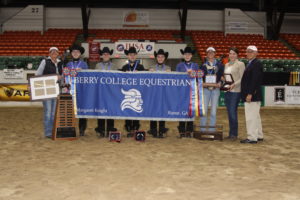 Berry College Equestrian Head Coach Margaret Knight said she saw that Western win was a possibility for Berry early Sunday, May 3. Berry wasn’t leading, but they were ranked in the top five teams at that point.

“I was confident it was in reach, for sure,” Knight said.

She knew she had several strong competitors still to ride for the team, and despite the fact that a national championship hung in the balance, she felt a certain optimism.

“I wasn’t terribly nervous. I was excited,” she explained. “We just had a gameplan for each of the girls.”

BUILDING A LEGACY: Berry  has, for some years, been a strong huntseat presence on a national level (its huntseat team barely  missed qualifying for nationals this year). Recently, however, it’s been picking up speed as a Western force, bagging numerous top-10 nationals placings and a national championship in 2011. Experienced riders looking to show in college are taking note, and the Berry Western program is reaping the benefits.

“It hasn’t changed as much in the middle levels, but more on the upper levels,” Knight explained. “We’re getting more seasoned riders coming in.”

The college’s equestrian program also got an infusion when it went from club status to varsity in 2007 and began receiving school funding. The school’s athletic director, Dr. Tom Hart, actually attended nationals and was on hand to see the women win.

THE TEAM: Berry’s nationals team was made up of relatively young members this year – Amanda Petersen, the Intermediate Horsemanship rider, was the only senior – and Knight expects most riders to return next year.

Meanwhile, she’s down to the business of recruiting more talent.

“I have a couple interested that I’ve already recruited, and I’ve got one that I’m going to look into,” she said.

Knight herself has been a part of Berry’s equestrian growth for nearly 20 years. She became head coach of the team in the 1997-1998 season after a very successful IHSA Huntseat career of her own at The University of the South. Coaching at a school that is notoriously huntseat-dominant but has an emerging Western program has necessitated creativity at times, she explained. Sometimes, she doesn’t have a seasoned Western rider available to fill a critical open slot.

In fact, this was the case with Peterson, the nationals team senior, who actually only began her Western career this year. Knight recruited her from the huntseat team for the Intermediate Horsemanship.

“I saw her ride in a Western saddle,” Knight said. “I was like, ‘I really think you need to go Western next year.’ She just tore it apart.”

Indeed she did; Petersen’s nationals performance was near flawless – she won her class for the team.

Debra Wright has served on and off as the team’s Western coach for the past 15 years or so.

This year, she formed a particularly close bond with the women she coached, and she said there was just something exceptional about this group from the start.

A UNIQUE TEAM: “It was a special team from the get-go,” she said. “This year, I just got extremely involved. They wanted to work so hard, and they were just so sweet. I just knew in my gut they were going to be successful. I just felt blessed.”

Team captain Elizabeth Poczobut, a sophomore this year, was a particular standout in Wright’s eyes.

“She was captain for a reason,” Wright said.

When the championship came down to the last class, Open Western Horsemanship, the other riders knew Poczobut could drive the team to the overall win, Wright said. Poczobut placed fourth in that class, propelling Berry to first place.

Wright, who has made a career as a judge in the Western world,  has officiated at many world-level competitions for breed and performance associations, and she has developed a keen fashion sense for the show pen.

A TRADITIONAL LOOK: Her influence on the team’s competition appearance can be clearly detected in the photos from nationals. She went for a traditional, clean look for this year’s team.

“I redid several wardrobes,” she explained, adding that the women were willing to take a leap of faith in some instances and invest in some classic, custom pieces.

“The fashion is in the fit and the tradition,” she said. “I’m not about the bling – there’s nothing traditional or basic to it.”

While appearance doesn’t determine performance, it is a factor in the judge’s perception of a rider, she explained.

“From a judge’s standpoint, we’re looking for that person who we would like to show a horse of ours,” she said.

Scroll back to top